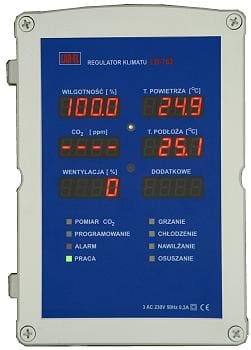 Current design of measuring probes ensures stable measurement results. In order to differentiate them, the new psychrometric sensors and probes for substrate temperature and air-conditioning feature colour-coded leads, thus they should be connected to the regulator’s boards as shown in the figure. Particular attention should be exercised in order not to reverse the terminals of temperature probes (T and GND terminals).

Subsequent implementations of new features may be tracked in the archive and in the history of changes of the SCADA LBX software and internal software of the LB-762 regulators.

LBX software changes described below pertain to version 2.4 of the LBX PC software or later and version 1.14.1 of the internal software of LB-762 controllers (firmware) or later.

REMARK 1: From version 2.x onwards, compatibility between different versions of servers and LBX software clients is not supported, which means that the installation of the same (e.g. 2.2) version of the LBX software both on the main computer (on LBX server), as well as on the other computers operating within common system (on LBX client computers) is required. If, for example, the server uses version 2.2, and the client 1.7.87, it will be impossible to establish communication between the client and the server of the LBX software.

REMARK 2: In order to boost the system’s speed and efficiency, for establishing connection between LB-762 regulators with the LBX server it is recommended to use Ethernet interface (as a standard, 4 x 2 wires in a shield), instead of the old-type RS-485 interface (2 wires per shield).

Anemometer — measurement of air flow speed in a cellar area

The LB-762 regulator has been expanded to include the LB-762-IO module with additional interfaces: measurement inputs (including 4 for anemometric probes) and additional control outputs. Details are given in a separate description.

Controlling humidity in a number of ways 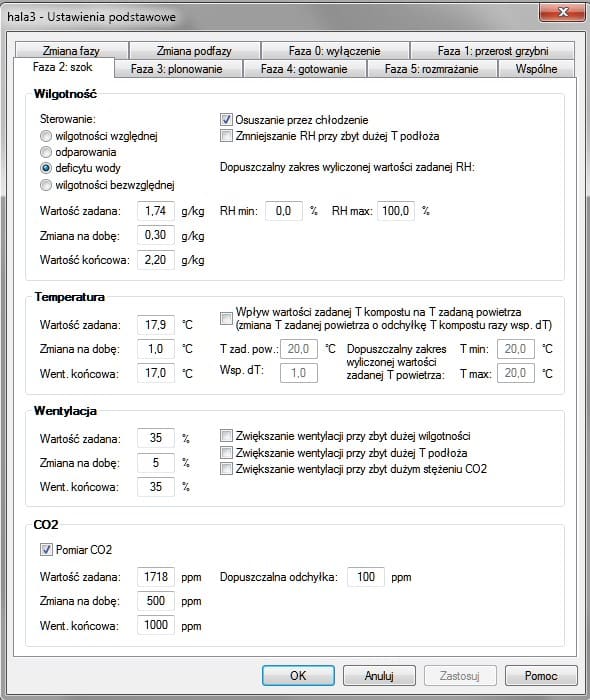 Accordingly to the adopted technology of mushroom-growing, it is useful to employ the right means of measurements and air humidity regulation in a mushroom-growing cellar. The Mollier graph or the LAB-EL Humidity Calculator software (available also for smartphones and tablets) may be used for calculating between different units that describe air humidity and for showing their temperature dependence.

Control based on relative humidity — current

LB-762 regulator monitors the current humidity in a cellar and by controlling the humidification and dehumidification it delivers the desired level of humidity in the cellar. This is the basic and most widely used means of regulation. Relative air humidity is temperature dependent.

Controlling based on relative humidity — estimated

Controlling based on relative humidity — estimated, is enabled in Equipment settings — air-conditioning. 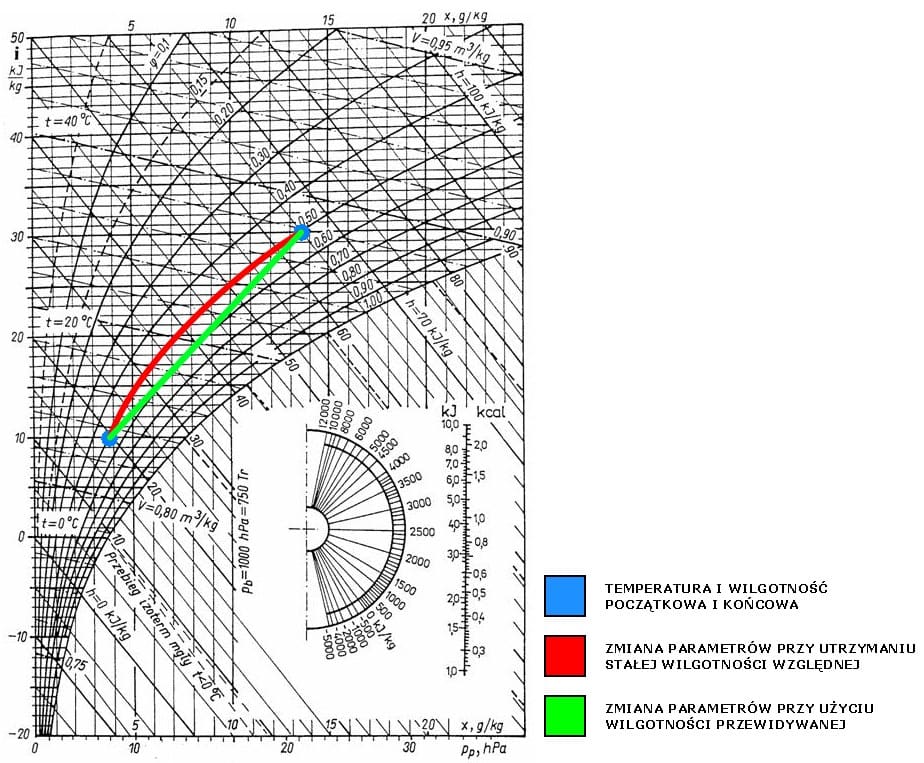 Control based on evaporation

The above parameters allow the absolute humidity in a cellar and in the outlet to be calculated. The difference between the two quantities is the water mass that appears in the form of cultivation evaporation.

The adoption of this method requires another wet-and-dry bulb thermometer, located at the air outlet of the air-conditioner.

Control based on water deficit

Water deficit indicated in g/kg (grams of water per one kilogram of dry air) is a method for determining humidity — that is, how much humidity (absolute humidity) is missing to fully saturate the water humidity (that is until the relative humidity equals100%). 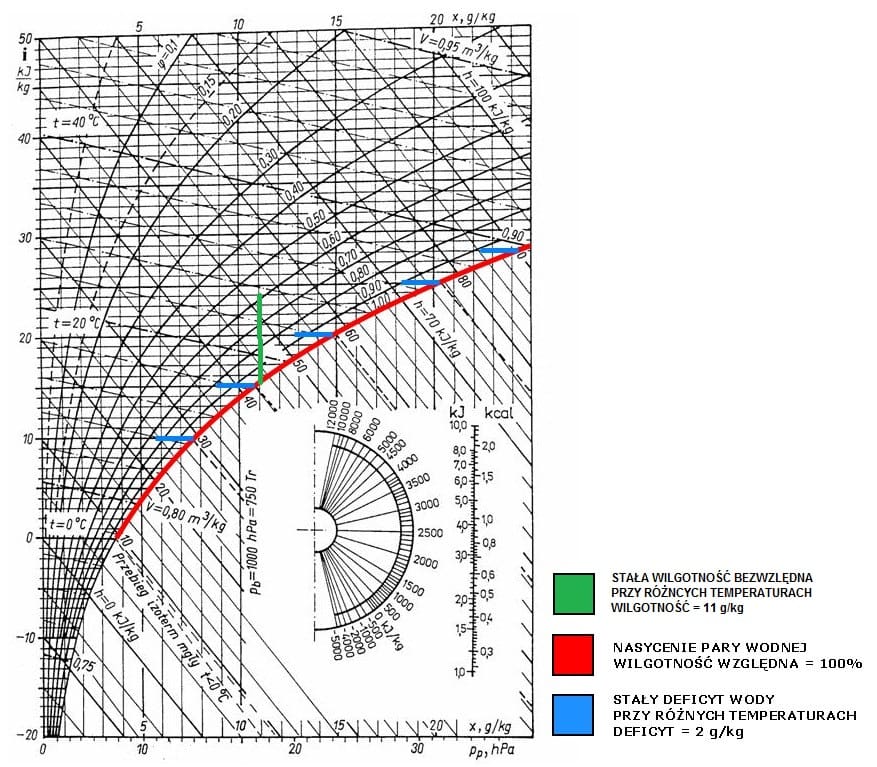 In the previous chart the green section marks an exemplary value of absolute humidity = 11 g/kg.

Two-stage temperature regulation is a more advanced form of regulation that may provide better results. In this process there are two interconnected regulation mechanisms, implemented in the LB-762 regulator:

Two-stage regulation allows smaller variations of air in the cellar to be achieved. The first stage of regulation sets a relatively slowly-changing desired air-conditioning temperature, and the second stage of regulation delivers the set parameters in the climatic tunnel, which in turn may occur much faster, more efficiently and with lower parameter variations and smaller changes in the efficiency of the working equipment.

In the case of single-stage regulation, the thermal inertia of the cellar is very high and the reaction time to changes in heating and cooling is also very long. In the case of two-stage regulation, the thermal inertia of the regulatory system in the climatic tunnel is much lower, the working equipment functions more smoothly, and a separate regulatory section, with no direct influence on the working equipment, is responsible for setting the right temperature at the outlet of the air-conditioner — the temperature that will trigger the correct air parameters in the cellar. 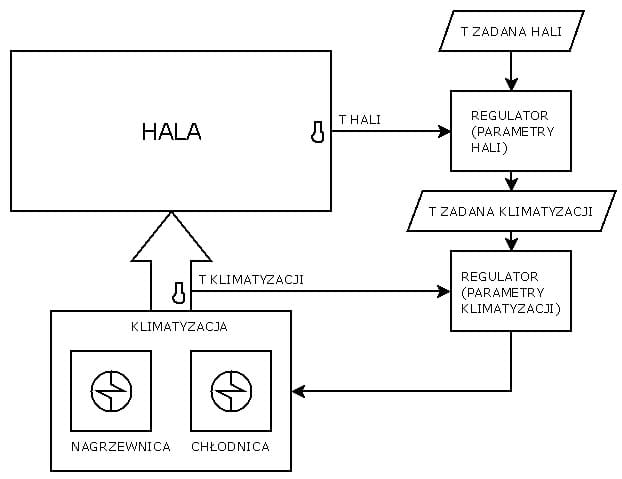 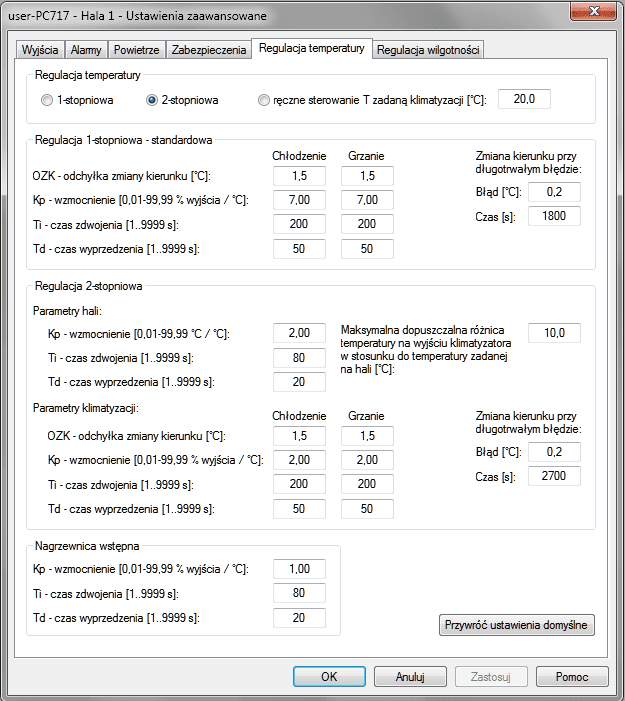 Explanation of alarms and exceptions 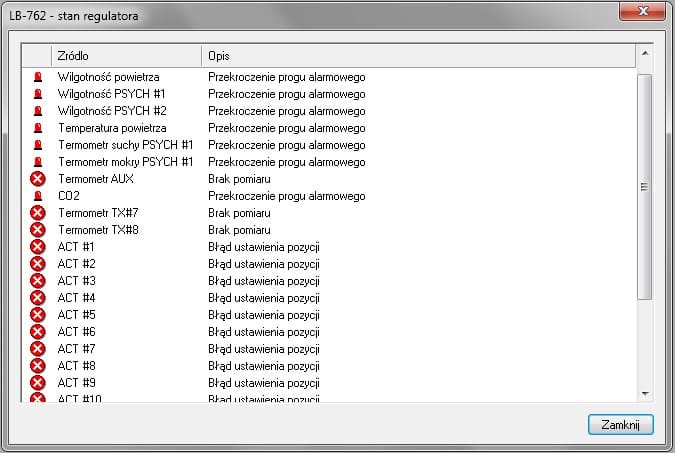 Complex regulatory procedures and a large number of interdependencies may result in a vague evaluation of the condition of the LB-762 regulator. In order to avoid this, an additional function is implemented to display alarms and exceptions noted by the regulator’s software; a dedicated screen in the LBX software is used to this end. In the adjacent example, states of alarm are triggered when the upper and lower value thresholds are exceeded, the absence of some measurements and the absence of a return signal from the servos are all visible. In practice, the screen enables the rapid diagnosis of system malfunctions and diagnosis of its behaviour.

With the use of the LB-765 remote controller, it is possible to set the operating parameters of LB-762 regulators (like in the case of LB-760A regulators). The programming of individual parameters (their sets) is stage dependent — it will differ slightly at each stage. Detailed operating instructions on how to use the regulator with the remote control is provided in the User Instructions.

In the LB-762 software, an additional Thawing phase is added for usage in the winter period to thaw frozen blocks. The whole machinery is then switched off, except for the heater, which is controlled in order to obtain the desired temperature in the cellar. Ventilation and air inlet openings are set to a constant value. 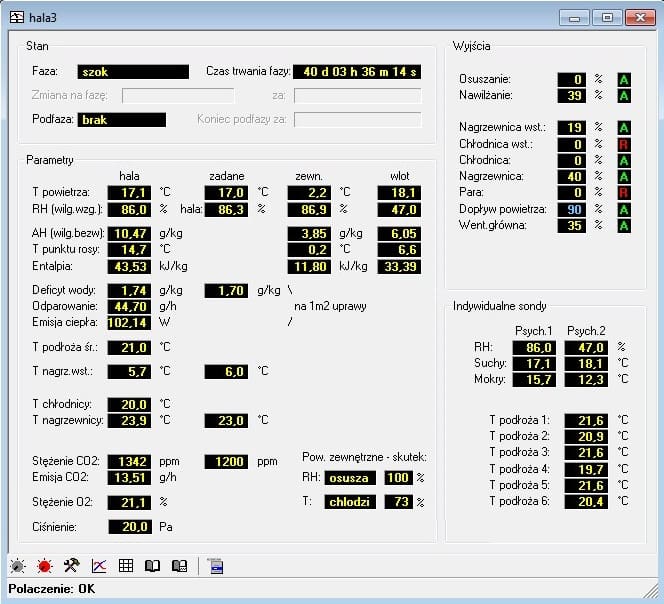 Additionally, oxygen content measurement is available for mushroom-growing cellars. It is also possible to regulate the fresh air inlet, based on CO2 (carbon dioxide) measurement (the same as previously) or on the basis of O2 (oxygen) concentration. To this end, in the CO2 measurement box an additional LB-905 oxygen concentration meter in a flux casing must be installed. The same air that passes the existing CO2 concentration meter, passes the new meter. The digital input signal from the O2 (oxygen) meter is connected to the S300 input from the same LB-762 regulator, to which the CO2 (carbon dioxide) meter is connected.

All additional measurements that the technologist may consider to be important, may be measured with additional thermometers and displayed in the very same LBX software, in which the measurement results from the growing cellars are displayed. For all additional measurements, the alarm thresholds may be set in the LBX software in order to signal the occurrence of any malfunctions. Depending on the temperature range and the required accuracy, an LB-489 hub (with 4 inputs) or an LB-480 hub (with 8 inputs) may be used, together with TN type sensors, e.g. substrate thermometers to LB-762. If greater accuracy is required, LB-710TX converters with the Pt1000 type sensors should be used.

The hub connects with the LBX server via an Ethernet, and the thermometers and other sensors are connected to the hubs. The LBX software may require a licence extension for additional measurement capabilities.

In the SCADA LBX software and internal software of the LB-762 regulator a number of reported issues have been fixed:

Reporting remarks about the software, assistance in configuring the regulator

All questions and remarks concerning the functioning of the LBX software that operates the controls in mushroom-growing cellars, suggestions for further development of the LBX software and user experience issues as well as their requirements for growing should be reported to

We provide free-of-charge assistance in the correct configuration of mushroom-growing cellar regulators. For this reason it is necessary to establish an Internet connection for a given mushroom-growing cellar, so that we — with a phone call — are able to observe the regulators’ functioning (charts) and correct their settings. Feel free to phone us for more details.